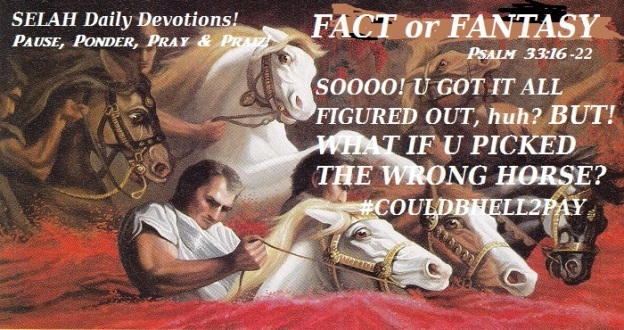 No king is saved by the size of his army; no warrior escapes by his strength. A horse is a vain hope for deliverance, despite all its great strength it cannot save. But the eyes of the Lord are on those who fear him, on those whose hope is in his unfailing love to deliver them from death and keep them alive in famine.We wait in hope for the Lord, he is our help and our shield. In Him our hearts rejoice, for we trust in his holy name. May your unfailing love, rest upon us, O Lord, even as we put our hope in you. Psalm 33:16-22

WOAH! TIME OUT! Can we at least agree that there’s a strong possibility that prophesy is being full-filled right before our eyes, live and in living color, huh? WHO KNU? (Ref. Matthew 24:6)

While the world maintains it’s diminutive-demoralizing ‘a wishin and a hopin’ …‘we can only hope so’ ideology of GREATER days to come and Satan continues to infiltrate unregenerated hearts and minds with taunting lies and alternative facts that perpetuate hopelessness and despair, the saints cling desperately to the reality of the yet unseen Eternal Hope!

There’s no denying that it’s extremely difficult to not be frustrated as the wickedness of man profusely increases. Nevertheless, amidst the scorners, believers have an advantage that the world knows not of and a HOPE that reaches beyond this world! We know that NOW IS NOT ALWAYS! According to our Kingdom Constitution, the sufferings of this present time, are not worth even sweating over; compared to the glorious future that awaits us at His Appearance! (Ref. Psalm 33:10-11)

Although, sometimes, God allows the horsemen to trample over our heads. Nonetheless, when faced with the harshness of real-time woes, we don’t tap out but anchor our Trust in Hope! We know that it’s just a temporary set-up to catch our enemies off-guard to their imminent destruction and our inevitable Triumph! When we’re at our weakest, His Uncompromising Faithfulness to save, rescue and cover us is stronger than our momentary doubts! (Ref. 2 Corinthisans 2:14)

Unlike worldly hope, duped in the fantasy, “I am the master of my own destiny’, a believers’ Hope is rooted in a spiritually-inspired anticipation that whatever God has promised HAS TO COME TO PASS! Hence, this holy boldness, assured by every Promise given by The Eternal One, Who abides free from outside influence, is the launching pad to our Eminent Salvation, giving substance to our faith!

Little children, while it’s clearly impossible to turn a blind eye to the downward spiral of this 21st Century society, our spiritual discernment confirms that while it may seem as if things are falling apart, EVERYTHING IS FALLING RIGHT IN PLACE!  TRUST2KNO, nothing  happens that can everrr take God by surprise! The Eyes of The Lord are always looking on His Beloved and His Ears are ever attentive to the cries of those whose hearts revere and Hope in His Holy Name! WOW! Didjaheardat?

Obviously, we have every reason to rest secure, trusting in the Strength of God’s Unfailing Love! NOW DATZ A FACT! #JESUSISLORD!