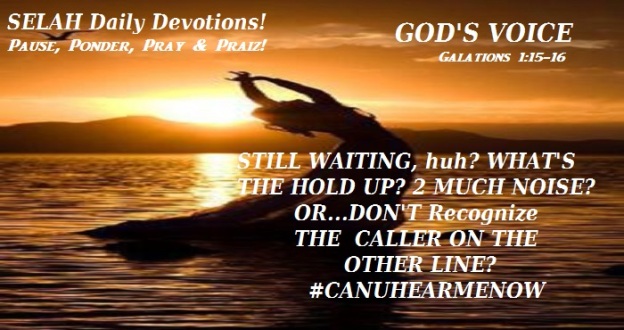 But when it pleased God, who separated me from my mother’s womb, and called me by his grace, to reveal his Son in me, that I might preach him among the heathen; immediately I conferred not with flesh and blood.  Galatians 1:15-16

In today’s scripture text, we hear the testimonial of The Apostle Paul in response to The Lord’s prompting to go spread the Gospel of Jesus Christ to the Gentiles. And we all know how that turned out, huh?

GGGGLLLLORRRRRAAA 2 GOD! However, what stands out to me, is what Paul didn’t do!

The Apostle didn’t wait to get an Executive Order from The White House nor a congregational consensus before stepping out by faith. Instead of asking anybody what they thought about it, relying solely on his personal relationship with His Savior, feeling no need for further validation, The Apostle Paul immediately obeyed God’s instructions!

How about you? When you’ve heard from God, what’s your initial response? Before you move, do you have to survey the opinions of your family and friends? Does the fear of failure, embarrassment, humiliation or retaliation cause you to stagger at God’s Word? Are you willing to take a leap of faith and just do what you believe God is asking of you?

As believers, we’re sometimes reluctant to move out on a WORD FROM GOD. Not so much because we’re not trusting God, but more often than not, it’s because of a spirit of difiance deeply rooted in the lack of self-confidence in our own ability. Ooops…#noshedidn’t!

In an attempt to re-assure ourselves that we’re in God’s will, like Gideon, we will ask God for a sign and come up with some kinda obtuse fleece as further proof that it is actually God speaking. ( Judges 6) And while God so graciously granted Gideon’s request, twice, as believers, we must recognize that God often tests our trust and confidence by commissioning us to do what seems impossible!

That’s what our life in Christ is about. God doesn’t require us to walk by signs, but by hope-filled trust that whatever He asks us to do, by His Grace, we are well able to perform.

The Bible says, “My sheep hear my voice, and I know them, and they follow me:” John 10:27. As we entreat His Presence daily in prayer inquiring direction, thru diligent study  and meditation of His Word, we learn to distinguish His Voice from the chatter emanating from the world and He will teach you what He wants of you!

That’s why it’s so important to build an intimate relationship with your Heavenly Father and not just show up at The Throne Room for emergency visits! God really cares about you! He is not a dead-beat Dad nor is He willing to settle for weekend visitations! God wants to be actively involved in every aspect of your life, every day!