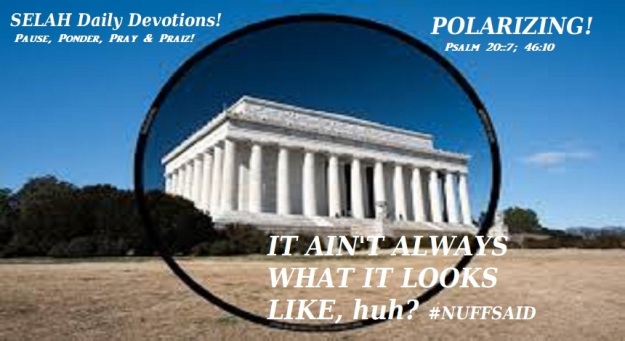 Some trust in chariots and some in horses, but we trust in the name of the LORD our God.  Psalm 20:7

He says, “Be still, and know that I am God; I will be exalted among the nations, I will be exalted in the earth.” Psalm 46:10
Well! Well! Well! Here we go again, huh? America is waking up the morning after The Mid-term Elections! And once again, it depends on which side of the aisle your heart is seated on whether you’re  absolutely delighted or definitely discouraged. Now I know, according to some, it’s socialally irresponsible to mix politics with religion! Or was that waaayyyy backndaday? Needless to say, those of you who know me, already know that I’m generally much to real for a whole lotta folk, so can we jus talk?

Has anyone (besides me) evrrr jus wondered how so many of our caucasian (and those few Afro-American) evangelical bretheren could be such staunch supporters of #45 and at the same time profess their absolute devotion to The Lord and Savior Jesus Christ? #ohnoshedidn’t! OH YES I DID! Honestly, to me, this scenario in itself seems nothing short of paradoxical! #ijs!!!

Now for you legalistic dogmatic religious enthusist who’re already looking at me some kinda way, I know that the Bible says, “Judge Not, lest Ye BE JUDGED”! (Ref. Matt. 7:1) There’s also another scripture that says, ““He that is without sin among you, let him first cast a stone at her! (Ref. John 8:7) please  allow me a few moments of  ‘senior folly’! I’m merely suggesting an alternative prospective for your  momentary consideration! Done lost ½ my church already, huh?

God, not willing that His children be ignorant of the enemy’s devices, has so graciously allowed anyone of us who lacks wisdom the privilege to merely ask Him! (Ref. James 1:5)

Hence, last nite, I was awakened from my slumber, hearing the TV, that being my custom,  tuned into a very popular Religious Cable Network , and lo and behold I was enlightened! Much to my surprise, there was a partaa going on among some of the most prominent elite wealthy evangelical preachers who having graced this  humongous Red/White/Blue Flag drapped stage, were stirring up this large coliseum filled with GOP advocates! Now, the reason that this seemed strange,ly awkward was because before I drifted off to sleep, those who were broadcasting and analyzing the results of the evening’s nationwide election activities had just reported that “The DEMS HAD TAKEN THE HOUSE BACK”! But as I listened further, I heard that #45 was congratulating himself  (and Nancy Pelosi) because the “GOP had maintained CONTROL OF The Senate!” NOW I GUESS THAT’S WHAT U CALL BREAKING NEWS, huh?  Suddenly,   someone on the stage daring  to state the OBVIOUS cried out “AMERICA IS POLARIZED!”  #uthink???

Ahhh Shucks! Nah, I’m not always the shiniest penny in the pocket, BUT…I could’ve told ’em dat a long time ago!  GUESS NOBODY ASKED ME, right?

But, the epiphany didn’t jus stop there! As I continued listening to ‘the WORDS DAT WERE COMING OUT OF HIS MOUTH’, IIIIII HHHEEEARRD, one of them say, “America was in a nationwide REVIVAL! Because they had followed the leading of the Lord in 2 Chronicles 7:14 by praying for the nation and supporting God’s designated 21st Century Cyrus, #45, who was bold enuff to finally set in order the things necessary to make AMERICA GREAT AGAIN, (open the way to reverse, Roe vs. Wade; keep illegal aliens out but keep NRA in place, and give RELIGION a much needed VOICE; ridding the nation of Obamacare while subsidizing THE WEALTHY at the expense of Social Security recipients; ignoring perversion, deception and manipulation while denying obvious racial injustice) THE RED WAVE WAS STILL IN PLACE! THEN...he SO eloquently and prolifically dropped da bomb announcing, that THE RED WAVE was symbolic of a THE BLOOD OF JESUS sweeping across this nation!  SERIOUSLY! #OMG! #WHO KNU, right?

BUT! CALL ME IDIOTIC OR BI-POLAR if U want, but I’m gonna stick with THE BOOK! LET EVERY MAN BE A LIAR AND GOD B THE TRUTH! TRUST2KNO2, THEY THAT WORSHIP HIM, MUST WORSHIP HIM IN SPIRIT AND IN TRUST! AS 4 ME AND MY HOUSE, WE SHALL CONTINUE 2 SERVE THE TRUE AND LIVING GOD OF HEAVEN AND EARTH! Datz my story and I’m sticking with IT!