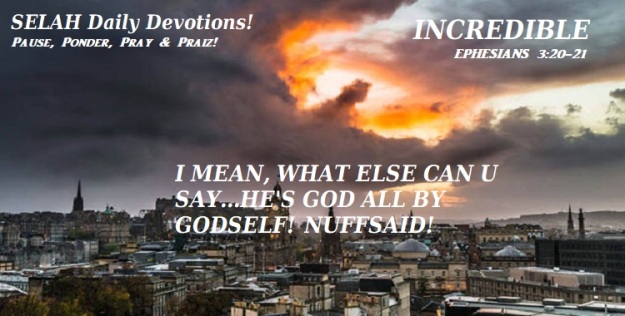 Now unto him that is able to do exceeding abundantly above all that we ask or think, according to the power that worketh in us, Unto him be glory in the church by Christ Jesus throughout all ages, world without end. Amen.” (Ephesians 3:20-21)

Funny how over time words can be used so casually to describe so many different things, yet there are  times when those same words ascribed to certain people, places, class or circumstances take on a uniquely exclusive persona, huh?  For example, “I jus love  me some fudge!”  “I love my family more than anything else in this world!” Or “That  was a great movie ”  or  “Let’s make America GREAT, again!” #ijs!!!

However, when we attribute these same adjectives to intimate the supremacy of The True and Living God,  suddenly we’ve catapulted into a realm of  unimaginable-reality that excels  far beyond the syntax of the natural man’s vision, hearing, touch, smell or taste,  that’s defies possibility without the guidance and instruction of The Spirit of Holiness!  Jus ask Bishop Larry Trotter!

No wonder the Bible says, “And there are also many other things which Jesus did, the which, if they should be written every one, I suppose that even the world itself could not contain the books that should be written. Amen.” (John 21:25)  OMG! Sounds like if the whole of what God has already revealed about Godself, The Bible would be too large to haul, much less carry, huh? At least, that’s how I’d paraphrase it, yall! Most of us are having a difficult enough time of digesting the part of the roll that’s been set before us! #AMIRIGHTABOUTIT!

One thing for sure, it’s indeed a WONDER! Anytime you bring GOD into the thought, conversation or circumstances, it automatically trips the wire and sets off the alarm signifying, “YOU HAVE NOT ENTERED INTO THE REALM OF IT’S SUPERNATURAL!”

As  previously mentioned, many of the same words that were once exclusively used to define the Inimitable Character of The Most High God, have been re-designated to insinuate something unusually pleasing or significantly unique. “The steak was amazing!” “Her performance was outstanding!”; “Did we ever have a wonderful time!” Et cetera…Et cetera…Et cetera!

Nonetheless,  it behooves us to not get it twisted! ONLY GOD IS GOD!

The Bible illustrates this  TRUTH profoundly over and over and over!  Remember, God allowed Isaiah to get a glimpse of the cherubim and seraphim circling the Throne symphonically calling out to one another ‘HOLY, HOLY, HOLY Is The Lord!’ (Ref. Isaiah 6:3)  Again, God’s Glorious Power over all of Creation  is clearly demonstrated as The Red Sea opened, becoming a Highway of Liberation for His Chosen Ones after 400 years of Egyptian bondage!  And Good God Almighty, there’s no denying God’s Amazing Grace and the Awesome Love manifested as HE single-handedly  ripped mankind from the clutches of Sin and Satan, sealing the deal once and for all, reconciling us back unto GODSELF (Ref. 2 Corinthians 5:19) WOW!

Can you even begin to imagine what Hell said, suddenly astonished, realizing that Jesus had been Victoriously resurrected from Death, Triumphantly proclaiming All Power and Authority in Heaven, Earth and beneath the Earth has been delegated to Him? (Ref. Matthew 28:18)

TRUST2KNO, some of the demons are still shaking, trembling confused saying, ‘“Aaaawww Hell NO! But, but, but…datz impossible, right?”