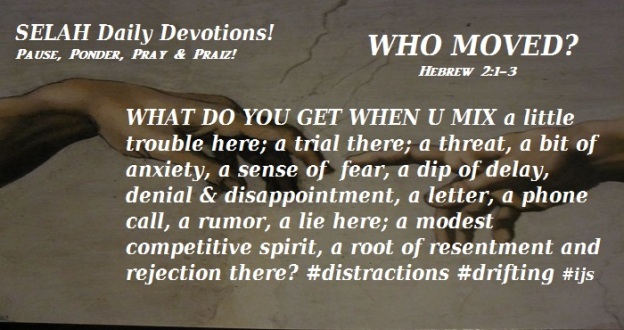 “Therefore we ought to give the more earnest heed to the things which we have heard, lest at anytime we should let them slip. For if the word spoken by angels was steadfast, and every transgression and disobedience received a just recompense of reward. How shall we escape, if we neglect so great salvation which at the first began to be spoken by the lord, and was confirmed unto us by them that heard him.” Hebrews 2:1-3

One morning during my devotion, the Lord began speaking to me about The Millennium Church Age. At this point in my walk with Jesus, needless to say, I’ve heard many a message preached about the Church of God down through the years! Gratefully, much has been pontification of the Glorious and Victorious Church as well as those that admonish the people of God concerning the goats and the sheep and the wheat and the tare. However, I must confess I was a bit surprised when God began to talk to me about a different threat (either unnoticed or unacknowledged) that has slipped under the radar of nodding watchmen into the Kingdom. He asked, “Have you heard the one about the ‘drifters and the disciples?”

After thinking for a moment, I responded “No, Lord. I don’t recall hearing that one.” Honestly, my mind went ‘back in da day’, remembering the Drifters, that group of fine black men, dressed to da T and sanng’n those ‘Good ol’ slow songs’! For the 30 and under crew, u betta ask ya Mama!

Abruptly bringing me back from the edge of Egypt, God began to reveal to me, “Oh yes! You’ve heard about them. They may have been called ‘Backsliders’ instead!’

Okay! I know about the backsliders! But, when church folk think of a backslider, what generally comes to mind are those wicked ol’ evil rebellious hypocrites, aka that heathen who has turned his back and walked away from the Lord and the Church. In other words, we’ve categorized them as somebody who didn’t really love the Lord, at least not as much as he loved the world. Right?  HOWEVERRR! The Lord, allowing me to peep into His thoughts for a moment, led me to Webster’s Dictionary to look up the word ‘drift’ to discover that Webster defines it several ways, but here are a few that Holy Spirit highlighted:

“To be carried along by a current of air or water; to pile up or to heap, to move or appear to move aimlessly, go along without knowing or caring where one is going; the sideways movement of an aircraft or ship off it’s projected course due to cross currents.”

OMG!  #Didjaheardat? First of all, you don’t have to leave the church at all to backslide! You can become a drifter sitting front row, center aisle, or back row, far left and yes, truthfully, center stage of the pulpiteers!  #WOW! That ol’ devil is as cunning and subtle in 2017 as ever, huh?

Satan knows he can’t just blatantly confront some of us face 2 face with the lies that have been proven so successful among the babes in Christ. You know; like, “I don’t need to go to church; I can read my bible at home (the bedside Baptist)”; or “who says you have to belong to a church to serve God?” What about this one, “Get with the times! Don’t be so narrow-minded; after all there are all kinds of roads that lead to the Universal god, you know The Higher Power!”  #BOOM!

Therefore, he applies another method to bring down the more seasoned saints. Unfortunately, all too often they’re just as lethal and successful! Satan hurls wicked devices (distractions) into our lives to catch us off guard and sidetrack us from our true mission! A little trouble here; a trial there; a threat here lodging a bit of anxiety there; an ominous sense of foreboding fear here; a dip of delay, denial and disappointment there; a letter here and a phone call there, a rumor here and a lie there; a modest competitive spirit there or a root of resentment and rejection here!  Didjaseedat? Who nu?

The scariest part about drifting is that you rarely recognize that you’ve moved at all! It’s not as if you were swept away from the shore by some gi-normous wave; you didn’t even hear the thunder or see the lightening flashing. In fact you never felt the ground collapsing underfoot. One minute, there you were sitting on the dock of the bay, watching the tides rolling—you thought you had it all together, handling thangs, maintaining! Until… you reached for that dose of The Holy Ghost and discovered that your cup was empty and your subscription had run out! Apparently, somewhere along the trip, we got so busy with other ‘real-life-stuff’ at the expense of your personal, intimate time with Jesus! Unbeknownst to you, you’d become weary in your well-doing and unconsciously decided that it don’t take all that!

Tell somebody it takes all that and more! More prayer, more fasting, more wisdom, knowledge and understanding of his word, more praising, and a whole lot more His Grace to stay anchored in The Lord!

But here’s the ultimate catastrophic fatality, when all hell breaks out in your life, we tend to look at Godc, ross-eyed, and place the blame for our circumstances on HIM!  Of course, we’ll most likely not own up to such brazen charges again our Redeemer, howeverrrr buried down in the seat of our being, we whisper “Lord, if  You  REALLY love me like You said, why did You let this happen to me?”  #BOOM  We’ve swalled Satan’s bait and the seeds of doubt have taken root  producing a crop of accusations, distrust and unbelief!  #canIgetagoodAMEN3X? OK, maybe not, huh?

TRUTH BE TOLD, God can’t lie and God can’t fail!  If He said, “I WILL NEVER LEAVE YOU, NOR FORSAKE YOU, NEVER” THEN IT STANDS TO REASON, GOD NEVER MOVED!  (Ref. Hebrew 13:5)
Precious Ones, with all that’s going on in the world around us, it’s incumbent upon each one of us to not make light of the lessons to be learned from The Apostle Paul’s teaching! Hence, make a real earnest commitment to BE a true disciple of Jesus Christ. GET A GRIP ON THE MASTER’S HAND AND HOLD ON AS IF YOUR VERY LIFE DEPENDED UPON IT! BCUZ IT DOES!

WHO MOVED? HOPEFULLY NOT U! #SERIOUSLY? #IJS