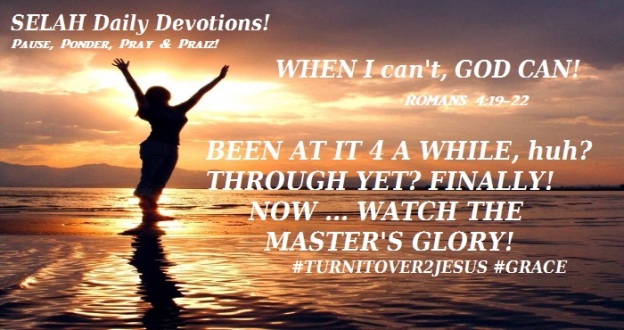 And being not weak in faith, he considered not his own body now dead, when he was about a hundred years old, neither yet the deadness of Sarah’s womb; He staggered not at the promise of God through unbelief; but was strong in faith, giving glory to God; And being fully persuaded that, what He had promised, He was able also to perform. And therefore it was imputed to him for righteousness. Romans 4:19-22

As a remnant of the 20th Century Church, at the ripe ol’ age of 60 sumptin’  I’ve lived long and experienced and seen enough to have a much clearer understanding of why The God of The Bible adamantly commanded His Chosen Ones to resist amalgamating with those outside of covenant relationship with Him. (Ref. 2 Corinthians 6:17) And some of us thought that God just wanted to keep us from having any fun, huh?  Considering the way this world is headed, now we see the consequences of not distinguishing ourselves from unbelievers. Apparently, Father still knows best, huh? #SERIOUSLY

Unfortunately, many who profess Christ, remain double-minded and straddling the fence! I can only assume their current stance is peculiarly depending on the group they happen to be in the midst of. Of course, God never intended for us to strut around robed in a spirit of self-righteous-arrogance, with our noses in the air, as if we are somehow better than anybody else! Howeverrrr, spiritually speaking, as recipients of God’s Amazing Grace, it does make us better-off! Oh no she didn’t!!! OOOHHH YES, I DID!

What’s the matter Zion? Are we allowing the hourly massive influx of social-media reports of wide-spread chaos leave us so traumatized by predictions of doom and gloom that they have muted our praise and drained us of  ANY Hope? If we’re walking around with our heads hung down and hearts inundated with fear and anxiety; worried about how we gonna make it, then what separates us from the Gentiles? Don’t shout me down, nah?  #IJS…

Abraham,  God’s Proclaimed ‘Father of faith’, found himself in a seemingly hopeless situation. Not surprisingly, Abraham tried to fix the problem by himself. He ended up with an Ishmael (the child of the flesh) when God intended to give him Isaac (the child of Promise)!  Finally, after the drama and chaos had escalated to the point that Sarah gave him an ultimatum (it’s either her or me) suddenly, Father Abraham had an epiphany, ultimately resigning to the one viable conclusion, “the only hope that I have of this thing ever working is Divine Intervention.” In other words, “Lord, without YOUR GRACE, I can’t do this!”

OMG! Can we ever identify with Abraham! How many times have we been in a situation and we tried and tried, we cried and cried, murmured and complained, spent all we had and still came up short? It was not until we, like Abraham, made a conscious decision to stop depending on our inability, started relying on God’s Ability and turned it over to Jesus, that our hope was revived!

As the text says, when all human reasoning for hope was exhausted, Abraham hoped on and God brought life into his dead situation. (Ref. Romans 4:17-18) Hence, when we come to the end of ourselves, God steps in and does what seemed impossible!

Stop listening to that devil telling you, “it’s too late, you might as well accept the situation for what it is –eminent defeat!” He’s still is and willl always be a LIAR and THE FATHER OF LIES! My precious saints, don’t allow your present (temporary) circumstances cause you to doubt the Faithful Power of God’s Eternal Word. Why settle for seconds?  #ijs If you are Abraham’s seed, you are the heirs of righteousness! #didjaheardat? WOW!

Lift up your heads, O Ye Gates! You have been  ordained, anointed and authorized as agents of change! SO, gird up the loins of your mind AND walk this thang out, confident, courageous and fully persuaded that SINCE YOU ARE IN CHRIST, THE CHRIST IN YOU automatically gives you a Supernatural advantage over natural consequences! (Ref. Colossians 1:27; 2 Corinthians 2:14)

TRUST2KNO, EVERYTHING GOD STARTS, HE COMPLETES! (Philippians 1:6) AND WHATEVER GOD PROMISES, HE IS WELL ABLE  AND WILLING 2 PERFORM!

PRECIOUS ONE,  JUS LET IT GO, REMEMBER…EVEN IF I CAN’T, GOD CAN!