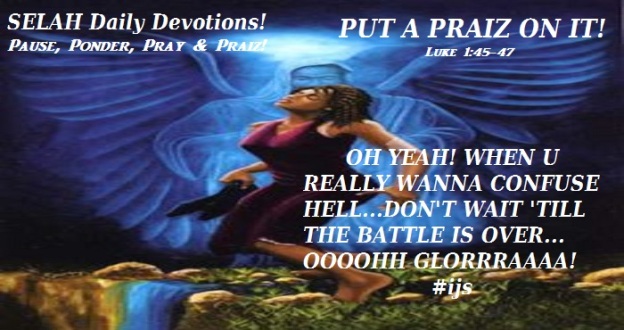 And blessed is she that believed: for there shall be a performance of those things which were told her from the Lord. And Mary said, My soul doth magnify the Lord, And my spirit hath rejoiced in God my Saviour. Luke 1:45-47

Have you ever wondered why it’s so much easier to clasp, with such enthusiasm, the worldly fables such as Hercules, Spider Man, The Easter Bunny, and Santa Claus and yet struggle to embrace the reality of The Unseen God? WOW!  Don’t shout me down, now…#ijs!

I suppose it has a lot to do with the other concept that folk have a tendency to deny, huh? Yall do know that everybody doesn’t believe that there’s a real devil that’s out to kill, still and destroy God’s most precious creation, humanity! Belief it or not, it’s still True! Nevertheless, our common enemy, Satan, knows that if we ever slip over into the realm of Faith to believe God, it releases God to do whatever He’s spoken over your life! Beloved, your potential to receive is only limited by what you’re able to believe! (Ref. Hebrew 11:6)

But Thanks Be To God! Our Heavenly Father, The Eternal Creator and Sustainer of Life has the uncanny ability to ignore what you and I think we know and do whatever HE purposes to do! Hence, therein lies the root of our challenge, looking beyond what we see and believing  and trust whateverrrr God says, huh?

The virgin, Mary’s statement typifies our innate tendency to swallow a camel but choke on a gnat! “How can this be since I know not a man” (Luke 1:34) But! We don’t have to be so hard on ourselves! We have lots of pressure from unseen forces to persuade us to focus on the insurmountable circumstantial evidence, personal deficits, past disappointments, failures and mistakes strategically designed to keep us from believing the Promises of God shall actually come to pass!

Howeverrrr! We must never underestimate The Immutable, Infallible, Absolute Reliability of The Word of God’s Power! (Ref. Hebrews 1:3) When God speaks, HE has the power to make it good! Every Word that God utters shall (cannot) fall to the ground. It MUST accomplish what it is sent to do and it shall not return unto Him void! (Ref. Isaiah 55:11)

If God has to interrupt nature to bring His Promise to pass, so be it! Ask Elizabeth and Zachariah! God had promised Israel that He was going to send The Messiah that they’d prayed for to deliver them from their oppressors and save His people from their sin ! Yet, when Zachariah heard the angel’s message that his wife, who’d been called barren, would conceive and bring forth his son, because of his doubt, he scoffed at this strange promise. “Now that don’t make no sense, how can such a thing happen? Therefore, God had to shut Zachariah’s mouth to keep him from spreading unbelief! Death and life are in the power of the tongue: and they that love it shall eat the fruit thereof. Proverbs 18:31 OMG!

Sounds uncomfortably familiar, huh? Have you ever asked God for something but doubted that He’d do it?

Even if God goes silent for 400 hundred years, He doesn’t change His Mind! Trust to know…God remembers what He’s already told you, so don’t you forget! Like Mary, just keep calling those things that be not as though they already are! And watch God manifest it!  (Ref Luke 1:36) And in the fullness of time, God broke protocol and The Word became flesh and dwelt among us! (Ref. Galatians 4:4; John 1:14)

Beloved, God heard your prayers! Hold on to The Promise and leave the rest to Jesus! Is there ANYTHING too hard for God? ABSOLUTELY NOT! So defy and denounce Satan’s lies! Didjaknow?  Beloved, when you believe and trust God, you can wreak havoc and confusion upon the kingdom of darkness by praising JESUS…through the test!

NOW…OPEN YOUR MOUTH…OOOOHHH MAGNIFY THE LORD WITH ME AND LET US EXALT HIS NAME TOGETHER! IT’S ALL GOOD! #putapraizonIT!