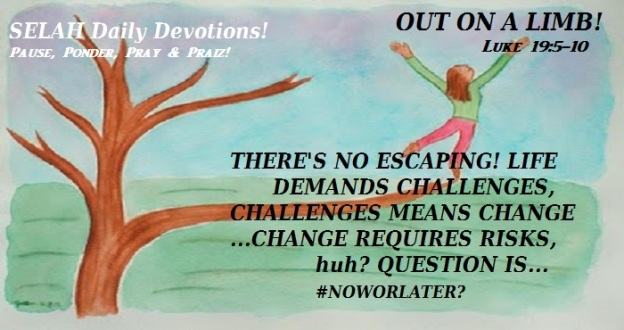 And when Jesus came to the place, he looked up, and saw him, and said unto him, Zacchaeus, make haste, and come down; for to day I must abide at thy house. And he made haste, and came down, and received him joyfully. And when they saw it, they all murmured, saying, That he was gone to be guest with a man that is a sinner. And Zacchaeus stood, and said unto the Lord; Behold, Lord, the half of my goods I give to the poor; and if I have taken any thing from any man by false accusation, I restore him fourfold.

And Jesus said unto him, This day is salvation come to this house, forsomuch as he also is a son of Abraham. For the Son of man is come to seek and to save that which was lost. Luke 19:5-10

According to the latest statistics of The US Census Bureau regarding the world population in 2016, there are approximately 7,346,235,000 people on earth, as of August 23, 2016! These numbers are expected to increase at a rate of 1.13% annually! WOW! Who Knu?

Have you ever gazed up at the night sky  and wondered, ‘IS THERE ANYONE WHO REALLY CARES ABOUT ME?’ Oooh, I’m not saying that You don’t know that GOD is REAL and believe that HIS WORD IS TRUTH! But, I’m just wondering if you’ve ever entertained the thought, given the enormity of individuals inhabiting Terra Firma, ‘What’s the chance that God has time to be concerned about what’s going on in my life, at any given moment? I mean, something like 1 in 7 billion? YET! That’s exactly what The HOLY BIBLE says! While many are called, The God of all flesh chooses us, name by name!

Perhaps, Zacchaeus pondered these very thoughts before risking public humiliation in front of the ever increasing crowds of folk who followed this new Prophet from Galilee! Being the Chief Tax Collector, he was already ostracized as it was. Yall know how folk feel about the IRS. Unless it involves a refund check, huh? Even though Zacchaeus was at the top of his profession and apparently extremely wealthy, we can safely assume that he didn’t have a whole lot of real friends. But for reasons, yet undisclosed by Scriptures, when he heard that Jesus was passing through town, Zacchaeus was driven by a passionate desire to get close to Jesus!

Now, we know that nothing Jesus did was by happenstance; wherever He went, He was sent on assignment. Nonetheless, who would  ever expect Jesus to make time out of His busy schedule for a face-to-face encounter with the likes of Zacchaeus! According to historical accounts, Jesus, Himself had testified that it’s easier to get a camel through the eye of a needle than for a rich man to get into Heaven. (Ref. Matthew 19:24) No! It’s not because The Father just wants poor folk, but because most wealthy people believe that everything they’ve accomplished, they’ve achieved on their own. So there’s no reason to submit to nobody—especially an Invisible Superior Being. After all, when this life is over, it’s over! Right?

Apparently, life had led Zacchaeus to the inevitable conclusion, ‘With all that I have, it’s still not enough to make me whole. Something missing, and from the stories I’ve heard, perhaps this MAN, JESUS, can fill the gaping hole in my life!’  Zacchaeus’ decision was eternally life-changing for himself as well as his family! He determined within himself that he would not allow anything to stand between his soul and His Savior. Hence, he ran ahead of the crowd, climbed a sycamore tree and went out on a limb to make sure that he didn’t miss Jesus!

I must confess, having grown up vertically challenged, I know what it’s like to be the runt of the pack, never quite measuring up to the crowd, as if you had a choice in being who God created you to be!

Unfortunately, the crowds aren’t the only things that keep some people from getting close to Jesus.! What about, pride, self-righteousness, education, careers, drinking and druggin, adultery and fornication, lying and cheating? And we can’t forget what would happen when the people we hang out with find out that we’ve given our lives completely over to Jesus 4 REAL! Yeah, sometimes we might have to climb over a whole lotta stuff to get to Jesus, huh? Nevertheless, like Zach, sooner or later everyone must answer, why am I here, where am I going and what am I going to do about Jesus? Whether we decide to accept or reject the Savior’s free gift of Grace, not one of us can remain indifferent!

Zach said, ‘I’m going to do whatever I need to do to get to the only ONE, who truly knows me, loves me and believes that I was worth dying for!’ Amazingly, Jesus knowing exactly where Zacchaeus was, spoke to him specifically as if He was the only person that He’d come to see! The Good News is…Jesus doesn’t play favorites! #didjaheardat?

Beloved, you are somebody special to Jesus! The Ol’ Skool preacha said, “He left His Home in Glory, came down thru 40 and 2 generations, was mocked, jailed, beaten, crucified, died, was buried, went down to hell before ascending back to Heaven, to be seated at the right side of The Father Eternally! There now, as our Great High Priest, He intercedes on our behalf, pleading for mercy, forgiveness and grace, waiting for you and I to come to the end of ourselves and seek SINCERELY after Him with all our hearts, minds, body and spirit!