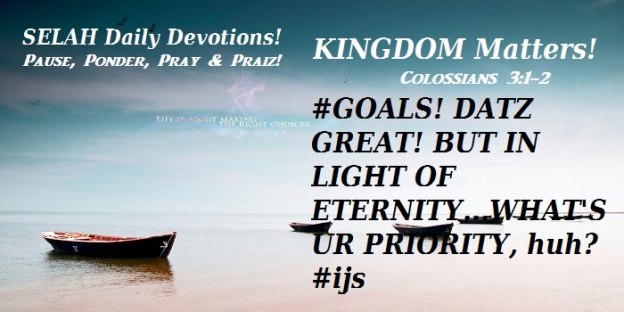 If ye then be risen with Christ, seek those things which are above, where Christ sitteth on the right hand of God. Set your affection on things above, not on things on the earth. Colossians 3:1-2

Is it just me, or have you noticed the newest 21st Century jargon? The sheer variety of objectivity seem to suggests that there has been an awakening in the consciousness of The Millenniums that has shifted away from ‘It’s all about me’ to ‘a genuine concern for the well-being of other than self’!  Or NOT! Okay yall, I’m might as well let the cat outta the bag. I’m referring to the popular trending idiom ‘MATTERS’.

Apparently, everything and the kitchen sink, has taken on a persona of distinctive significance. And there’s a T-shirt somewhere out there to prove it! Hey, I’m not judging, simply highlighting the obvious, k? If you ask anybody what are some of the things that they’re mosted interested in, it’s guaranteed that their responses would be endless. However, may I suggest that given the innate nature of humans to be drawn to individual preferences, in order to secure its fundamental security and uniformity, certain things are essential to the future of any society!

Obviously, there will be those who’d swear that being ‘pet parents’ is no different from parenting ‘live children’ or wearing pants 25 inches below your waist-line to a job interview is as acceptable as nudity in a court room. As long as you’re comfortable with yourself, huh? Now that The Supreme Court has determined that regardless of sexual orientation, Love Matters! The capitalist affirm that it’s the bottom line that counts, not human rights! Hence Money Matters! Since, The NRA ascribes to ‘the right to bear arms’, above the ‘right to live in a safe neighborhoods’ thus—everybody’s packin! Billions of funds are being funneled to Animal Rights activists discretly away from those insidious issues of education, homelessness and hunger! Seriously!

Of course, we are not implying that as Christians we’re not supposed to have interests outside of the church. But! Does anyone care about what Matters to God? Well? Looking at the more contemporary-all-embracing, newly-enlightened, come-as-u-r-stay-as-u-r doctrines of the 21st Century church, apparently, ain’t nobody got time for dat?  It’s common place, now that church-folk tend to gravitate (assembling together) to like-minded sophisticated folk who prefer creature comforts above christian character! And if the ol’ skool preacha insists on sticking to those irrevelant antiquated suggestions of The Holy Bible and preachilng against SIN, well we can just Google the net and fine another church that’s more condusive to our religious persuasions!

Far be it for me to infer that Father GOD knows what’s best for His Children! However, isn’t that the reason that He drew us out of the world? God wants us to be happy and holy! That’s why He sent The Holy Spirit to live in us, leading and guiding us through the maze of a hellish world, instilling godly morals to assure that we get safely home to Heaven’s Glory! “Follow peace with all men, and holiness, without which no man shall see the Lord:” Heb. 12:14

It’s perfectly understandable that an unregenerated person has no hope beyond this life, hence their universe is focused on accumulating a wealth of materialistic trinkets! However, where did so many carnal-minded christians come from?

I still remember when those who have a personal trust in Christ, peering through  the clarity of the Scriptures, wore our earthly life as a loose-fitting overcoat, easily discarded and replaced by the robes of righteousness, laced with Love, Loyalty, Grace and Mercy as garments of praiz! WOW! #GOALS #KINGDOM MATTERS!